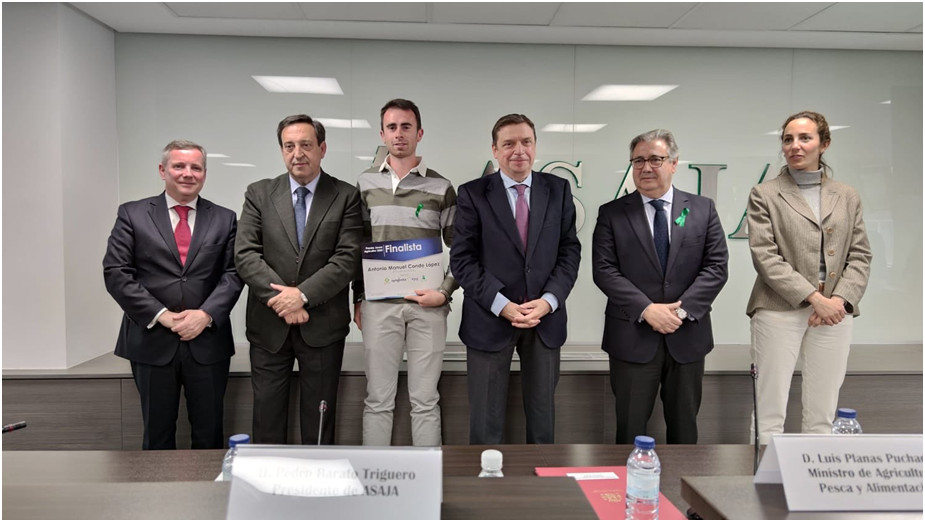 Antonio Manuel Conde, from Jaen, part of the network of demonstration farms of the LIFE Agromitiga project, finalist in the "Young Farmer 2020" awards

The Agrarian Association of Young Farmers -ASAJA- held on February 17, the VI edition of the "National Young Farmer Awards". The ten selected young people who were finalists in this sixth edition of the awards, among which was Antonio Manuel Conde from Jaen, with the project "The olive grove of yesteryear", have received their diplomas from the Minister of Agriculture and Fisheries, Food and the Environment, Luis Planas, and the name of the young woman who will come to Brussels to represent our country at the European competition to be held on March 26 in the European Parliament, Elena Soberón, has been released below.

It should be noted that Antonio Manuel Conde is one of the farmers who, together with his family, manages one of the demonstration farms of the LIFE Agromitiga Project. Specifically, it is an olive grove farm located in the municipality of Alcalá la Real (Jaén), where groundcovers have been used for 4 years.

This VI Annual Youth Conference was inaugurated by the national president of ASAJA-Joven, María LLorens and the PPE MEP, Juan Ignacio Zoido, and the national vice president of ASAJA, Pedro Gallardo, who also presented the study “Digital transformation in the agricultural sector"; Santiago Bernal, director of innovation at CEFETRA, with a presentation on New technologies and Pilar Giménez, director of Corporate Affairs at SYNGENTA with a presentation on "New Technologies and Climate Change".

The award ceremony was attended by the Minister Luis Planas; the president of ASAJA, Pedro Barato; the CEO at SYNGENTA (entity sponsoring these awards), Robert Renwick and the MEP Juan Ignacio Zoido.