Concern about the lack of rainfall and its effect on cereals, both on durum and soft wheat, as well as on sunflower, has been the main topic during the Presentation Day of the LIFE Agromitiga project, held on 27 June at the Caja Rural del Sur Foundation. More than two hundred farmers, who attended the Congress, were able to learn about the project, national and international productions and markets, improvements in sunflower cultivation conditions and development in the traceability regulations of agricultural products, among other matters.

Concern about the lack of rainfall and its effect on cereals, both on durum and soft wheat, as well as on sunflower, has been the main topic during the Presentation Day of the LIFE Agromitiga project, held on 27 June at the Caja Rural del Sur Foundation. More than two hundred farmers, who attended the Congress, were able to learn about the project, national and international productions and markets, improvements in sunflower cultivation conditions and development in the traceability regulations of agricultural products, among other matters.

The latter reported on the Plan, developed by the Ministry, to improve competitiveness. It should be finished by November. This plan covers all sectors: water, extensive livestock, women in the rural world, markets or agricultural insurance ... and it will start analysing the current situation and showing a diagnosis of the problems that will allow to define the challenges and needs prior to determine the strategic objectives.

In his speech, the president of ASAJA Seville, Ricardo Serra, emphasized the very different yields of the current cereal campaign in Andalusia (with areas such as Lebrija or Las Cabezas, with 2,000 kg, and others such as Écija, which exceed 3,000 kg) and the huge difference between our average yields and those of the rest of Europe –affected fundamentally by our climatology- with averages such as those in Ireland, which exceed 9,000 kg per hectare, which forces us to reduce costs if we want to reach profitability.

The president of the Spanish Association of Conservation Agriculture and Living Soils,Jesús Gil, presented a photograph of the evolution of no tillage in Spain and Andalusia. In our country this model of agriculture occupies two million hectares, 16% of the agricultural area; and in Andalusia only 12% of the useful agricultural area. Therefore, he demanded greater support from administrations, which should encourage this type of agriculture, which in the last 20 years has shown its undoubted economic and environmental advantages.

The rainfall accumulated since the beginning of the hydrological year - October 1 - until June 22 has been 28% lower than the average in the last 25 years. In this period, a total of 395 liters/m2 have been collected in the Guadalquivir basin, compared to the usual average of 545 l/m2. This situation, unfortunately becoming very common, has led ASAJA Seville to present in Brussels, together with the AEACSV, the Ministry of Agriculture, Livestock, Fisheries and Sustainable Development, the Andalusian Institute for Agricultural and Organic Production Research (IFAPA), the European Federation of Conservation Agriculture and the University of Córdoba, a project to mitigate the effects of climate change on agriculture, called the LIFE Agromitiga project.

The executive director of the AEAC.SV, Emilio J. González, was responsible for presenting this project to Andalusian farmers, reminding them that the effects of greenhouse gases are increasing, and as a result, temperature is expected to rise from 5 to 7 degrees by the year 2100 and rainfall is expected to decrease by 20%. "If this trend continues”, he said, “water restrictions, major fires, and an impact on the rivers will be generated." Therefore, "adaptation and mitigation measures must be taken to minimize the effects."

Among the objectives of the LIFE Agromitiga is to contribute to the transition towards a low-carbon agricultural system, providing validated results, applicable to the European Union's international commitments on climate change. Likewise, the project wants to dissociate CO2 emissions from the use of raw materials and natural resources, through Conservation Agriculture, favoring techniques that promote a circular agrarian economy.

Analysis of productions and markets

Afterwards, the director of Herbaceous Crops of the Confederation of Agrifood Cooperatives of Spain, Antonio Catón, explained to the attendees the international context of the cereal market, which is “complicated because of the agreements between different countries. What’s more, the market is open and there is free competition in the European Union”, he said.

Catón presented to the farmers the cereal balance of the 2018/2019 campaign, where it is reflected that in Spain we produce 23.4 billion tons of cereals, while the total consumption is 37.425 million tons. “So what do we do by storing cereal? In addition, we import 14.940 million tons, we are one of the countries in the world that import the highest quantity of cereals, ”he said.

Regarding corn, whose price has been increasing due to the effect of rains in the United States, he informed that Spain will need 12 million tons, while regarding wheat, for now, and because of the good harvest in the EU in 2019, prices do not show the rise of those in Chicago Market. In addition, it is also hampered by the lack of competitiveness against those from the Black Sea, a situation that will lead to an accumulation of surpluses in Europe by the end of 2019/2020.

Antonio Catón took out “red card” to farmers who sell durum wheat without price and recommended not to sell without permission and to be grouped to defend prices better.

The managing director of Cocereales SA, Arturo Hidalgo, offered the national perspective of production and market and, as the previous speaker, stressed that "we need much more cereal than we produce."Regarding Andalusian production, where the area planted by cereals has been declining since 2012, he informed that Andalusia, with 2,445,203 tonnes, will cover 11% of the national cereal production in this campaign (23,142,476 t).Specifically, it will provide 504,000 tons of durum wheat, 449,000 tons of soft wheat, 481,000 tons of barley, 265,000 tons of sunflower and 184,000 tons of corn.

Hidalgo stressed that the quality is very good, although he said “that is why prices will not be guaranteed. Although national cereal production has been reduced by 40%, Spainish production covers only 0.7% of the world cereal production”.

He also advised to optimize resources, size and adjust costs to increase margin, create input purchasing centers, obtain cheap financing, not speculate in markets without being professionals, not sell below port prices or deliver without price, start to understand future markets and risks and keep in mind that we compete in a global market.

The technical manager of Syngenta, Juan Trigos, explained the project that Syngenta is carrying out in several countries, and in the case of Spain in Andalusia, in collaboration with the AEAC.SV and ASAJA-Sevilla, to improve the profitability of Mediterranean farms of sunflower, cereals and legumes. In the project, three different cultivation systems are being compared to see which one offers more profitability and how it improves the soil and the environment: a conventional tillage system, a conventional tillage system but using the inputs in an integrated way to improve production and a system that includes Conservation Agriculture.

Although the project is going to last three years, this first year of commissioning is already reflecting that the plots under non-tillage and those with integrated management have greater benefits and better yields than the others.

Regarding the current situation of sunflower cultivation, Juan Trigos said that “in the last 50 years it has been established as the most reliable alternative to cereal rotation” and that it is a crop “that has not lost its support from the companies to try to make it viable in Andalusia”. As he explained, high oleic sunflower, which is 32% of sunflower sown in Andalusia, “is a good proposal to improve profitability since the yields per hectare of the latest varieties of high oleic sunflower are equivalent to those obtained with traditional varieties”, he said.

REAFA and DAT, in force next autumn

Therefore, Gómez informed that from October 15 onwards, an accompanying document for transport (DAT) will be mandatory, which intends to extend traceability not only for the food product, thus respecting the European directive.

Using this tool, "we will have the opportunity to see where the food comes from, where and how it is being transported, and where it arrives." It is, therefore, "a fundamental innovation that helps with food security, which in Andalusia is vital," he stressed. Likewise, he commented that in recent weeks, technicians in the field have been trained to make the application work in whole Andalusia by next autumn and that it will also allow users to make inquiries and expedite some procedures telematically. 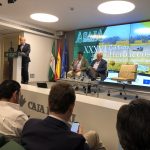 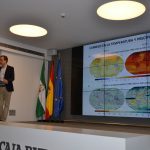