On May the 4th, the on-line Debate Conference about the LIFE AGROMITIGA project to learn how to improve agricultural sustainability just before the new CAP

Institutional declaration of the 8th World Congress on Conservation Agriculture 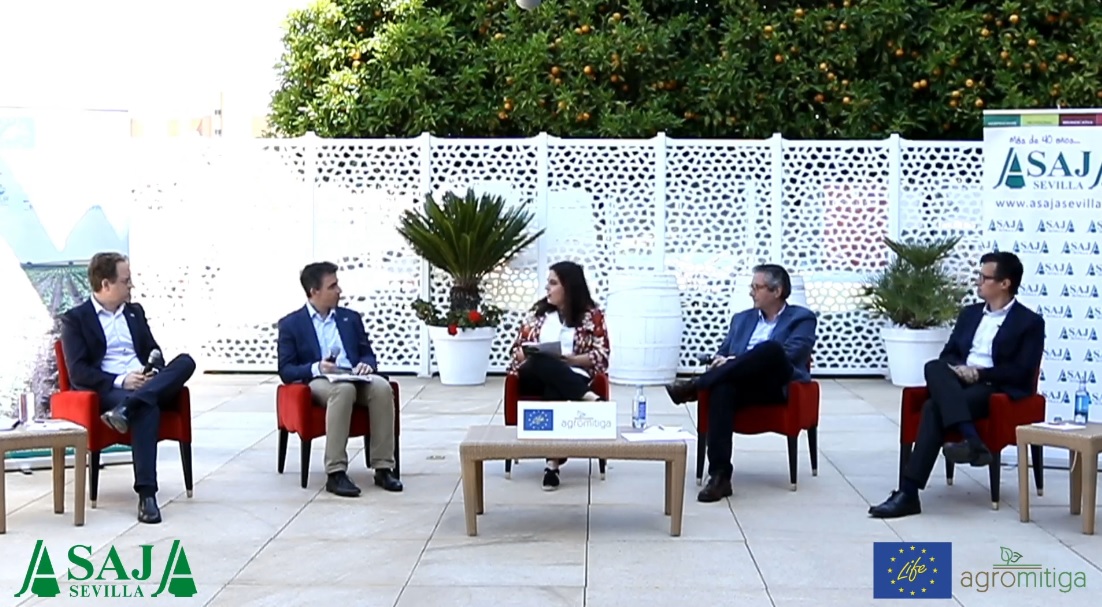 ASAJA-Sevilla has held a Debate Conference on the "Introduction of the new CAP strategic plans in 2023 and opportunities to improve the sustainability of the Andalusian agricultural sector respecting the new plan", within the LIFE Agromitiga project, a project that aims at developing climate change mitigation strategies through agriculture which makes good use of carbon.

Since environmental conditions and commitments of the new CAP and its repercussions for farmers and ranchers are currently being debated, the conference, held yesterday at the NH Collection Hotel and available on the YouTube channel of ASAJA-Sevilla and the LIFE Agromitiga project (https://bit.ly/3vGy47D), has focused on the analysis of these specific issues.

Therefore, ASAJA-Sevilla organized a roundtable, moderated by the agri-food journalist Natalia Ortiz, and attended by the Coordinator of Agriculture and Livestock of the General Secretariat for Agriculture, Livestock and Food of the Junta de Andalucía, Armando Martínez; the coordinator of the technical services of Asaja Seville, Antonio Caro; the professor of the School of Agricultural and Forestry Engineering of the University of Córdoba, Emilio González and the coordinator of the LIFE Agromitiga Project of the Spanish Association for Conservation Agriculture - Living Soils (AEAC.SV), Óscar Veroz.

opened the meeting with a presentation of the novelties brought by the Common Agricultural Policy (CAP) that is still being negotiated and that will come into force in 2023, as well as its interest in sustainability. The representative of the Ministry of Agriculture criticized that the "green deal" of the European Commission is not accompanied by a budgetary efforts. The new CAP poses many environmental demands while slightly reducing the budget compared to the previous framework.

Regarding environmental aspects, one of the most prominent figures in this new reform is “eco-schemes”, which are specific voluntary measures financed with a percentage, yet to be determined, of the direct payment budget.

Regarding this new figure, Armando Martínez has confirmed that the Andalusian Ministry of Agriculture is working on this subject to make all sectors part of these eco-schemes and help Andalusian farmers and ranchers avoid high costs while fulfilling them.

Besides the eco-schemes, other outstanding elements of the new CAP are: the new concept of aid preceptor, the so-called “genuine farmer”, and the new concept of basic payment that, as agreed in Brussels, allows a limited convergence and gives options to maintain the current system of regions.

The LIFE Agromitiga project, which has been developing for three years so far, is coordinated by the Spanish Association for Conservation Agriculture - Living Soils (AEACSV) and in collaboration with ASAJA-Sevilla, the University of Córdoba, the Ministry of Agriculture, Livestock Fisheries and Sustainable Development of the Junta de Andalucía, IFAPA and the European Conservation Agriculture Federation (ECAF), is going to finish at the end of 2022.

The main scope of action is Andalusia, although actions are also carried out on farms in Greece, Italy and Portugal. The project hopes to contribute to the transition towards a low-carbon agricultural system, providing validated results, applicable to the European Union international commitments on climate change.

LIFE Agromitiga also work towards dissociating CO2 emissions from the use of raw materials and natural resources, through Conservation Agriculture (CA), supporting techniques that promote a circular agricultural economy.

Conservation Agriculture (CA), which pursues minimal soil disturbance, permanent goundcovers and crop rotation, is the basis of the project and plays a key role in increasing the carbon sink effect of the soil, while managing to reduce greenhouse gas (GHG) emissions, especially CO2 and N2O emissions.

This model of agriculture introduces changes in the dynamics of soil carbon and favors its sequestration. The non-tillage and the permanent groundcovers reduce the decomposition rate of remains from the previous crops, decrease the organic matter, due to lower aeration and accessibility of microorganisms, and increase the soil carbon, because of the residues that remain on the surface after the harvest.

With Conservation Agriculture, atmospheric pollution is reduced by eliminating pruning remains and residues after stubble burning, and the use of inputs (fuel, fertilizers, phytosanitary products, etc.) is optimized, thus reducing CO2 emissions.